A dash of Latin passion is catching hold in Castlemaine and surrounds.
The distinctly Spanish flavour fomenting in some unexpected local hotspots follows a happy convergence of events and people.
Take Jose Baena, for example.
Jose hails from Andalusia, Spanish Granada and came to Australia in his mid-30s about 15 years ago.
Those who know him say he’s “passionate about Castlemaine – about life. And about Spain!”
Jose runs Granada Café at Wesley Hill, where for the past two years he’s been busy bringing the flavours, aromas and ambiance of his Andalusian background to this little local locale.
But it’s not just his signature paella, tagine and tapas that’s going down well with the locals.
Lately, Friday mornings at the Granada, Jose has also been dispensing Spanish language classes among an increasing number of locals who’ve been developing a taste for all things Spanish.
Among them Debra Petty says the culture of Spain has a distinct appeal to many.
“It’s very warm, very passionate and very welcoming,” she says.
Another of those learning the language is Angela Down who’s also signed on for the Spanish Flamenco dance classes that have recently become available in Castlemaine.
“I’ve wanted to learn Flamenco dance all my life,” says Angela who began her own love affair with things Spanish while reading Spanish poetry in her teens.
“I am a dancer but until now I’ve thought of myself as too young or too old for Flamenco. But Flamenco is a cross-generational dance form and it’s also perfect for older Señoras because it celebrates energy and passion and life experience,” Angela says.
Teaching the Flamenco dance classes is Kirsty MacCallum who recently started taking the classes on Saturdays at Castlemaine’s Movement Zone studio.
“They’re being received very, very well,” says Kirsty, an experienced Flamenco dance instructor who’s previously lived in Spain.
“I’m finding there’s quite an interest from people who’ve wanted to learn Flamenco all their lives and are maybe in their 50s but until now there hasn’t been the opportunity, particularly in regional areas.”
Coming up at Granada Café, Kirsty and her daughter Jessica – also an accomplished Flamenco dancer – will be performing on Saturday evening, November 23.
Kirsty says the little cafe has become quite the venue for live Latin music.
“It’s quite exciting,” she says, mentioning Argentinian gypsy Miguel who plays regular Flamenco and Latin American gigs there.
“He really likes the vibe Jose has created here,” Kirsty says.
“Every Friday night we’re having live Spanish music here,” Jose says.
Jose says his aim in opening the Granada was to create “something authentic, something with soul”.
“I wanted to create something as close as possible to a Spanish bar,” he says.
It seems to be working.
“The main comment people say here is that they feel like they are in Spain. Every night here is magical. We have such a wonderful, special time,” Jose says.
Currently keen to secure a business partner for the Granada, Jose is also noted locally for the travel tours he runs to Spain.
“The tours are just gorgeous and very unique,” he says.
“I focus on the south of Spain, but we also do the whole of Spain as well.
“I’ll organise them in response to demand and next year I’m planning to incorporate Morocco as well.”
Kirsty notes that the enjoyment of discovering Spanish culture appears to be part of a wider appetite for Latin culture, music and dance developing in the area.
Local salsa dance teacher Camila Serrano, originally from Colombia, is right now busy organising the Castlemaine Fiesta de Salsa set for Castlemaine’s Theatre Royal on November 16.
“This event has so much love and work involved, a Latin festival where Australians get to understand and experience the Colombian culture, their traditional dances and food,” Camila says.
The fiesta will feature a Cuban salsa class, Latin food, Colombian traditional dance and salsa performances involving Camila’s local students.
It will also feature nine-piece Latin and salsa jazz band, Melbourne-based Tumbao Social.
Meanwhile, Castlemaine’s Maurocco Bar has been featuring Cuban outfit Son Quba performing every second Sunday of the month.
“There’s a vibe happening,” says Kirsty, acknowledging the different Latin dance forms – both Spanish Flamenco and Salsa – that Castlemaine locals are increasingly taking to.
“And I think people have really taken to it as a social outlet, and a way of getting together that involves more that just sitting around talking.”
“People are so drawn to this world of music, dance, food, passion,” Angela observes.
“It is fascinating how so many people are drawn to a culture, to a place that is not your own. Who would expect this in central Victoria?” 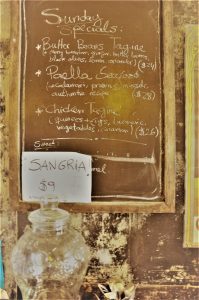 AM for career in theology

Fanny Finch grave to be marked