This is the story of a reunion…the kind of reunion people who sold something years ago only to find it is worth a small fortune today will well and truly relate to.
It’s also the story of a grand old fire truck with a secret life…
It all began locally around Woodend way when well-known Macedon Ranges identity Arthur Hayes was just 19 years old. That was when he first came across the characterful Hotchkiss truck which began life in Paris in 1913 – as Hotchkiss Paris 3410 in fact!
When Arthur first discovered it, the truck was being used by a local electrician to power a saw-bench. Before that, it was used to help water the garden of the property Flint Hill. But before its life in the 1950s when Arthur eventually purchased it, the truck worked as a pumper for the Melbourne Fire Brigade.
But it wasn’t made originally to be a fire truck. It was one of a numbered batch of trucks manufactured as gun carriages. Hotchkiss, a well-known arms and car manufacturer at the time, made the trucks to fulfill an order from a country in South America which was undergoing upheaval at a considerable level. But before the trucks could be deployed, the conflict subsided. Exactly where it was and who subdued whom is not recorded with this particular truck’s history but we do know that when it became surplus, the MFB purchased and imported a handful of the vehicles.
As far as we know it disposed of by them around 1945 and that brings us back to Woodend.
Arthur purchased it in a very sorry condition in 1957 and set about restoring it. The cost was quite a sum back then, 50 pounds, a lot for a lad in his late teens but the unique appeal of the Hotchkiss was too strong and that was that… 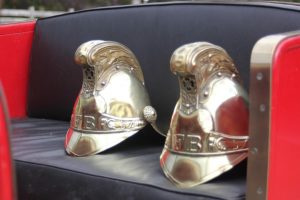 He got it back into working condition, restored the body and, as he said, because anything goes when you are 19, he painted the wooden wheel spokes white. Although not strictly correct, this became the key element to their reunion many years later.
During their first partnership they enjoyed a number of outings including the 1960 Golden Fleece Rally which took them to Queenscliff from Melbourne.
There were around 80 vehicles in the event and Arthur is proud that the Hotchkiss “ran perfectly”.
After about 10 years, Arthur sold the truck and he thought that he would never see it again. Mind you, he did not sell it for much.
“Probably for about the cost of a slab!” Arthur said.
Fast forward to present times and Arthur, who does still like buying the odd vintage vehicle, had a call from a friend.
“I think I’ve found your fire truck for sale on line,” the friend said.
And how did he know? The white painted wheel spokes gave it away!
Buying the Hotchkiss for the second time set Arthur back $26,000 and what surprises him is that it has come back complete with all its brass fittings…nobody in all those years had removed them.
“Just think…we first meet when I was 19 and we’ve come together again now I’m 80.”
Why did he buy it again?
“Well,” Arthur said. “I’ve got three grandchildren!” 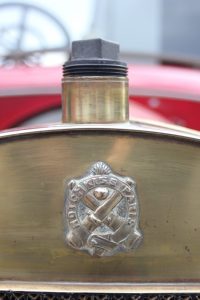 CFA exercise in the Cobaws

It’s not too late to relay