Arriving in Australia in 1957, aged 25 and a proud ‘Ten Pound Pom’, Ron Alexander never looked back.
The carpenter loved the larrikin fun of Australian building sites and was soon dubbed ‘Ron the Pom’.
“I didn’t take offence to it, it was a term of endearment as far as I was concerned. You give as good as you get,” he laughs.
Originally from the small village of Beechingstoke in the Vale of Pewsey in Wiltshire, Mr Alexander joined the air force in 1950 under national service, aged 18, and trained as an aero engine mechanic.
He spent several months in Egypt during the Abadan Crisis in the Persian oilfields and while there crewed a Hastings aircraft flight to Baghdad.
Mr Alexander returned to England and weeks later was sent to Singapore during the Malayan Emergency conflict.
“I got to know a lot of Australians there because we played football and soccer and hockey against them, and when I went back to England I couldn’t settle, so in 1957 I applied to emigrate and within a month I was on the boat (the RMS Strathnaver) coming over.
“There were 1200 migrants on the boat but only two carpenters, and I was one of them.”
Mr Alexander was involved in the construction of landmark buildings in Melbourne and Bendigo, including the Bendigo City offices, a seven-storey office building in Exhibition Street Melbourne, Bendigo’s twin cinemas and the McDonalds in High Street with the bridge over the back.
He worked right across northern Victoria in Kerang, Shepparton, Echuca and Kyabram and built the Milton and Thomas chemist building and various others in Castlemaine, before later founding the Bendigo Brick Company.
He spent many years playing both Aussie Rules football and soccer with several Bendigo clubs and was a founding member of the Bendigo Soccer Association.
In 1972, Mr Alexander won a seat on the then Strathfieldsaye Council, serving as a councillor for the next 20 years and as shire president in ’74 and ’83 and deputy president in ’75 and ’84.
“I fought six elections and won until the last one,” he says.
“I was mortally wounded and I thought ‘God, what’s going to happen, it will never exist without me being there!'”
Mr Alexander was also a member of the Axedale Water Trust for many years and has served as a Justice of the Peace since 1974. He continues to work as a member of the signing register at Bendigo Police Station and with the Gisborne roster that has just begun.
Now a local to Mount Macedon where he lives with his wife Wendy, Mr Alexander has been awarded a Medal of the Order of Australia (OAM) for his service to local government and to the community of Greater Bendigo.
He reflects fondly on his long time on council, though he remembers “there were lots of fights”.
“I was quite often the only opposing voice, but I stuck to my guns on what I thought was right.
“I think Australia got a pretty good deal getting me for £10,” he laughs. 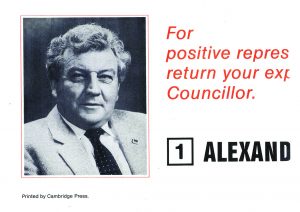